Americans like alcohol, it is no secret, and one thing to note is that Americans can all agree on their favorite type of alcohol. The Business Insider states that 21% of Americans favor liquor to wine or beer, but this preference may differ based on the state.

The top favorite alcoholic drinks in the United States are quite consistent every year. However, certain trends, health consciousness, new findings, advertising, and marketing, all contribute to the type of beverage people choose most. The most popular drink also changes annually depending on the trendiest drink to take when you feel a certain way or the newest addition to the market. 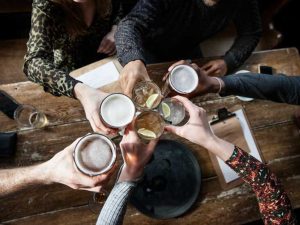 A person’s alcoholic preferences tell you more about who they are; some people have a higher affinity for gin than whiskey, while others do not partake at all. Even bartenders may come up with ideas about individuals based on whatever drinks they order.

In a survey conducted by Alcohol.org, respondents ranked beer as the most popular alcoholic drink in America. Americans drank a total combined quantity of 6.5 billion gallons of beer in 2013, which adds up to about 27.6 gallons for each person.

However, we all know that having too much of something good can have its consequences. With the way beer is metabolized in the liver and permeated all through the body, having one too many beers may be dangerous for your health. Experts advise that a minimum of 2 glasses of beer a day is a safe quantity to drink and poses less harm to your body with time. Drinking beer regularly can also lead to alcohol dependency, mental health problems, sleeping issues, or liver disease.

Other popular alcoholic drinks ranked by the people who took the survey include:

Each drink, of course, has different alcohol by volume percentage, and even though you may be able to drink several beers in a sitting, drinks like rum and coke should be taken in moderation.

In comparison to beer, wine is considered by most people as a significantly healthier alcoholic drink option, also making it increasingly popular among Americans. However, wine consumption still does not beat beer consumption in the rankings as beer drinkers take much more beer than wine drinkers do wine. 39 percent of alcohol drinkers in America were seen to prefer beer while 35 percent go for wine. As much as beer has been the most popular alcoholic beverage in America for years, there has also been an increase in the number of breweries in the US. More millennials and college graduates are taking beer and integrating it into their daily lives. This has resulted in large companies producing new beers in various flavors. Liquor stores all across America are also stocking a variety of beers. Americans have such a high affinity for beer that they have thought of creative ways to incorporate it into their lives. This is evidenced by activities such as beer yoga, which is where people drink beer as they do yoga. Beer also has various uses aside from drinking, making it helpful to beer enthusiasts.

Beer As A Social Alcoholic Beverage 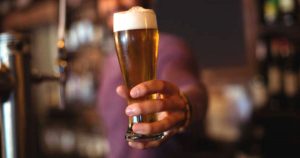 Beer has also been seen as a communal beverage in comparison to liquor or wine. Given that it has a lower alcohol concentration than other alcoholic drinks, beer might be the beverage of moderation. Different kinds of alcohol may bring out our emotions in various ways, and the feelings associated with a glass of beer may result in a more positive bar experience. The British Medical Journal published a study in 2017 indicating that even though beer drinkers typically felt less attractive and energized than those taking wine or liquor, beer had fewer disadvantages associated with a rough night out. Participants of the study also sampled every kind of alcohol for the same, but beer lovers felt significantly less aggressive compared to those taking hard liquors. 17 percent of the same beer drinkers revealed that they felt ill after drinking compared to 48 percent of the liquor drinkers. This indicates that beer is an all-around beverage option for people drinking in social settings and why it is the most favored alcoholic drink among Americans. Over 6 out of 10 Americans take alcohol, and beer is a clear preference among these individuals. A 2017 Gallup poll showed that 26 percent of the participants preferred liquor, 30 percent went for wine, and 40 percent were for beers. It has also been found to be more popular among men than women with 62 percent of the male drinkers in the Gallup poll choosing beer in comparison to 19 percent of the women who participated in the survey. This popularity of beer among men can also be attributed to sports, which is one of America’s best pastimes.

A study conducted by the University of Minnesota showed that 48 percent of American fans take alcohol at sporting events. Out of this number, most of them drink at least two alcoholic drinks. When asked what alcohol they thought of when certain sports were mentioned, 70 percent of Americans associate beer with baseball, and 75 percent associate it with football. The sports industry is essential to beer manufacturing conglomerates which channel lots of money into American sports. This is why the US has had such a long-standing relationship with beer.

People are also changing how they drink beer with beer enthusiasts moving away from the traditional bar and towards local breweries. A 2017 Nielsen study about the craft beer industry indicated that up to 30 percent of trips to brewery taprooms have taken the place of trips to bars.

Even though beer is deemed safer to drink compared to stronger alcoholic beverages when taken in moderation, too much of it can easily transition into emotional surges, confusion, and a lack of coordination. Casual drinking of beers can also become a problem and develop into dependency and alcohol abuse.