As an alcoholic seltzer, hard seltzer contains alcohol, flavoring, and carbonated water. It usually has about four to six percent alcohol, typically obtained from malted barley or fermented cane sugar. You may find yourself taking a few of these hard seltzer drinks daily due to their refreshing taste, and with all the flavors, it can be hard to control your drinking if you are not careful. When you find that you have developed a daily drinking habit from taking too many hard seltzers, it can cause concern as your health may be at risk.

Even taking one hard seltzer daily can be considered heavy drinking, and it is a slippery slope to an alcohol use disorder or addiction. Alcohol causes damage to one’s health organs while resulting in different health concerns. There are various indications to help you tell if you are developing a hard seltzer addiction, with some being easy to identify and others being a bit harder to recognize. The severity of one’s hard seltzer addiction may also determine the warning signs they present.

One sign of alcohol abuse is isolating oneself from others to drink privately. This makes it particularly hard for loved ones to intervene and help the affected individual. It is easy to overlook a mild alcohol abuse problem. However, it can escalate into a dangerous situation with time, so it is important to act on any early warning signs. The earlier one seeks treatment, the earlier they can get back to their normal lives.

If left unchecked, a hard seltzer addiction can quickly spin out of control. An alcohol use disorder affects one’s life negatively and causes harm.

There is no specific formula to identify an alcoholic because the symptoms typically co-occur with others. Also, one sign can result in another one causing further health problems with time.

If you suspect that your indulgence in hard seltzers may be leading you towards a dark path, here are the surefire ways to tell if you have an addiction so you can get the necessary help.

You are Drinking Hard Seltzer Excessively. 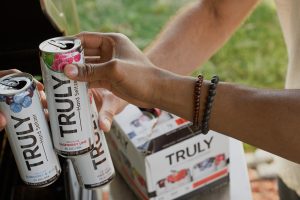 Moderate or social drinking for most people includes a maximum of one or two drinks daily, depending on gender and body weight. However, social drinking can also cause problems, especially if it has unwanted side effects. Having more than five drinks daily is considered binge drinking, but most people suffering from an alcohol use disorder gradually consume more than that. It is also common for people suffering from advanced alcoholism to consume more than twelve drinks daily. On the other hand, problem drinking usually starts slowly, and most drinkers discover that they need to take more alcohol to feel the effects of consumption.

Most people struggling with alcoholism usually reach a point where they promise themselves or loved ones to reduce their drinking. Still, it is common for them to backslide on this promise. Once they start drinking, it becomes very hard for them to stop. They do not consider the aftereffects of overindulging, and they will keep going until they are drunk.

Endless Hard Seltzer Use Despite Knowing You Have A Problem.

Someone suffering from a hard seltzer addiction might not change their life even if it affects their life in a significant way. Usually, such individuals know about the problems their drinking has caused, but they might feel helpless to change it. Some people might be in denial about their alcohol addiction, so they may not know how significantly the consequences can affect them. They will keep going in a downward spiral as they lose their perspective and self-control, making it harder to address the problems their drinking has caused. However, recovery is still possible despite the severity of the situation.

You Spend Too Much Time on Alcohol-Centered Activities

Individuals with a hard seltzer addiction usually spend a lot of time engaging in activities centered around alcohol use. They put important responsibilities such as family, home care, and work commitments to the side. They will usually justify their actions by citing the need to unwind or claiming no one understands what they are going through.

You Experience Withdrawal Symptoms When You Do Not Take Hard Seltzer

When a heavy hard seltzer user stops drinking suddenly, they develop alcohol withdrawal symptoms. These symptoms include tremors, headaches, sweating, increased heart rate, insomnia, vomiting, and nausea. Other signs to look out for include anxiety, irritability, difficulty concentrating, depressive symptoms, or fatigue. Severe symptoms from alcohol withdrawal include convulsions, hallucinations, blackouts, and fever. Anyone experiencing these symptoms should get medical assistance immediately.

Your Tolerance for Hard Seltzers Has Increased

If you have been drinking hard seltzers for an extended period, your body builds up a tolerance for the drink. This happens when the drinker has to take higher quantities of alcohol to experience the same effects. Most people with an alcohol addiction assume they do not have a problem as they do not always feel intoxicated when drinking. Thus, they end up damaging their bodies further despite not feeling drunk or impaired.

Some additional questions to ask yourself if you think you are addicted to alcohol or alcoholic drinks such as hard seltzers include the following:

If you have answered “yes” to most of these questions, you need to seek help concerning your drinking. It takes courage to admit that you have a problem and get some help, but it is beneficial in the long run.